rules of the game

GAME RULES
To read the official rules, from our international governing body please head to Basketball Victoria's Rules of the Game page here

The basic rules of basketball are as follows:

In our local junior competition a game is made up of two halves (20 minutes each half). Teams have 40 minutes to shoot the basketball through the hoop (basket) as many times as possible (at your team’s scoring end! this will swap at half-time). Each time this happens two (2) points will be added to your Team’s score. Three (3) Points will be awarded if the basketball is shot from outside the designated three-point line. One (1) point will be awarded if the basket is shot from the free-throw line during a foul shot.

Each team has a maximum of five (5) players on the court at any time. Substitutes are made by the Coach to replace players on the court. They are ‘substituted’ or ‘subbed-off’. This can only be done at certain times in the game and the referee will let you know when it is ok. Subs can be called as often as the Coach likes.

The team who has control of the basketball is on OFFENCE. The team without the ball is on DEFENCE. Both parts of the game are equally important! Teams on defence are trying to stop the offence from shooting a basket. The defence should always try to stay between the basket and the players they are guarding.

There are two ways for the ball to be moved up the court on offence - by ‘dribbling’ the ball, which is by bouncing the ball with ONE-HAND only on it, or by ‘passing’ it to another of your team members. Passing is a lot faster and ensures all team members enjoy the fun of the game.

While stationary (not passing or dribbling) the player holding the ball must always keep one of their feet on the floor, this is called the ‘pivot’ foot. Players can only lift their foot if they wish to dribble, pass or shoot the ball. The pivot foot can twist but must remain in contact with the floor and in the same place. If players move their foot / feet without dribbling, passing or shooting they are penalized and the ball given to the other team, this is called ‘travel’.

The ball must stay within the court of play (inside sidelines and baselines), otherwise it is awarded to the other team.

If a player receives 5 fouls during a game they must be subbed off and leave the court and can take no more part in the game.

It is important that all players spread-out on the court when playing. Good spacing let’s everyone have a go at playing. Players should assume that every basket attempt will miss and attempt a rebound. Getting possession of the ball after a missed shot attempt is called a ‘rebound’.

When two players get possession of the ball at the same time this is called a ‘jump ball’. A jump ball starts the beginning of a game and then every jump ball possession after that s determined by the possession arrow.

A Coach can stop the game to talk to their players, in our junior domestic competition each coach can call two (2) time-outs each half. When a timeout is called players must ‘hurry’ to the sideline to talk with their Coach to maximise their timeout and grab a quick drink.

Now you know some basics of the game keep practicing and remember the most important thing is to have fun! Also, basketball is a team sport! There is no ‘I’ in TEAM! 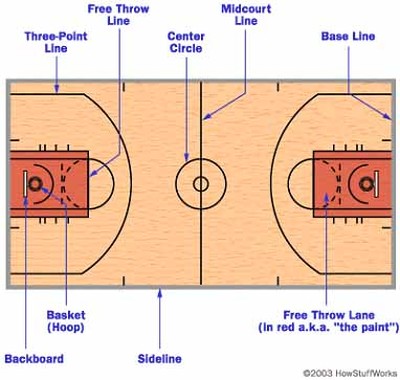