Scoring roster
It takes a village to raise a child and it is an expectation and part of our registration terms and conditions that all families volunteer to assist with scoring duties at least once a season. After all, the Coach and the Team Manager volunteer their time to get other people's kids playing. Basketball scoring is not hard and there is comprehensive information about it on our website here.

How to score electronically (at Keilor main stadium only effective 10 November 2018)
Stadium scoring is already in use in many other Associations and also in the MUVJBL Friday night representative competition. For those who have not used Stadium Scoring before it is relatively straight forward, however you can find a user guide here and an actions guide here. There is also a video tutorial here however there are a number of functions that we won't be using such as the clock function so take from it what you can.

Note, there still needs to be two scorers on each bench, as the score clock will still need to be operated in conjunction with the lap-top. Team Managers will no longer need to collect the score sheet from the front desk at the main stadium.

Referees will be able to assist if there are any issues. In the unlikely event of a system failure paper score sheets are available from the front desk at the main stadium.

How to score on paper (at outer venues until electronic scoring is introduced)
A "How to Score" sheet can be found on the KBA website here.
This cheat sheet from St Christopher's found here, is also very handy.
A blank score sheet for teaching purposes can be found here.

It is important that scorers are aware of the following rules and advise the referees by signalling them when they occur. If you are unable to catch the referees eye, the scorer should sound the siren by pushing the button on the scoring device.
Important info for scorers regarding qualifications effective from Saturday 16 June 2018
Recording fouls on the score sheet
Player fouls
When recording player fouls, insert the following over the next foul box for the offending player:
- A PERSONAL FOUL. a forward slash “/”
- A TECHNICAL FOUL, a “T”
- An UNSPORTSMANLIKE FOUL, a “U”
- A DISQUALIFYING FOUL, a “D”

The referees must be notified immediately and the player must leave the game if they receive either:
- 5 fouls
- 2 technical fouls (T), or
- 2 unsportsmanlike fouls (U),
- a technical foul (T) and an unsportsmanlike foul (U); or
- a disqualifying foul (D)
The score bench should let the Coach know when any of their players receives a fourth (4th) personal foul, the referees do not need to be notified of this. Once a player receives their fifth (5th) personal foul, the referees need to be alerted and the player must be immediately be subbed off the court and can no longer participate in that game.

Team fouls
When a team receives eight (8) team fouls in a half, the score bench should immediately alert the referees. Any subsequent fouls on that team after the eight (8th) team foul will result in two free throws for the opposition.

When a referee signals a technical foul, unsportsmanlike foul or disqualifying foul then this MUST be recorded differently to a normal personal foul on the score sheet.

The referees must be notified immediately and the coach must leave the game if they meet any of these conditions:
- 2 “C” technical fouls;
- 3 technical fouls (1 could be a “C”); or
- a disqualifying foul “D”. 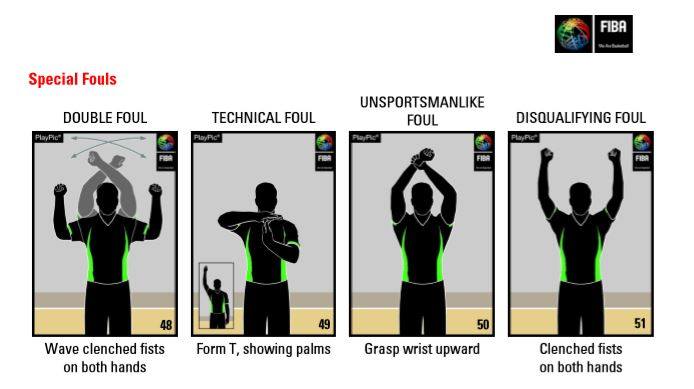